Because of its size old earth moving machinery rarely makes its way into museum collections but the size of the club's grounds and the enthusiasm of the Morris family have resulted in a fascinating collection of road making and earth moving machinery being on display at the club.This machinery has been restored to working order and can be seen in action in the big sandpit in the back paddock on rally days.

Built approximately 1963. Fitted with Hancock scraper. The elevator flights which drag material into the bowl are powered by 2/71 (2cyl x 71 cubic inches) 2 stroke GM diesel. Front engine is 4/71 2 stroke GM diesel.10 cubic yard capacity. These were used by the army in Vietnam for airstrip building as they were small enough to fit in a plane. Found in a derelict condition, restored over 3 years. Owner Nathan Morris

Built approximately 1962 115hp.6 forward speeds, mechanical drive for blade lift, circle rotation and lean wheel. Fitted with rear rippers. Front wheels lean over to aid steering as unit runs a locked diff. These graders set the benchmark for Caterpillar as to their reliability, strength and productivity. Many of these units operate on outback stations maintaining their roads.

Built approximately 1946. Used by the US Army Corp for building airstrips in the Pacific Islands - still has US army plates fitted. Powered by International UD 14A Starts on petrol(carby on LHS) then when warm runs as a diesel(injector on RHS).4 cyl 461 cubic inches. Gear drives in tandem with 5 speed gearbox with low & high ranges. All hydraulic operation. Found at Tynong.

Owned by the Morris family

Found in a dismantled state at Tynong.

Owned by the Morris Family

Built mid sixties All electric operation. Powered by General Motors 4/71 (4cyl of 71 cubic inches) which drives a generator to power the steering motor (no steering wheel, steered by toggle switch) and winch motors to operate the scraper. Allison transmission driven off the rear of the generator. Rated at 8 cubic yards usually pushed by a dozer to speed loading. It is imperative to keep the revs up for maximum steering. -- owned by the Morris Family.

The Euclid dates from 1951 and is one of the oldest operational examples in the world.

Owned by the Morris family.

Built in 1947 by Le Tourneau at Rydalmere in Sydney. Powered by a 3/71 GM diesel two stroke. Only 13 were ever built. It loads in the front then the load is lifted by cables up and over the top to tip out at the rear. This stops the ground being ripped up by crawler tracks when turning. The operator must gain enough lift speed to carry the load over the centre where he releases the brake to dump. Bringing the bucket back requires the same skill. Found at Wandong under a fallen pine.-Owner Nathan Morris

All mechanical clutches and brakes.

Worked in the Gippsland area.

Owned by the Morris Family

Built at Rydalmere Sydney in 1953. Designed and built for push loading scrapers. Calpable of 25kph. Steered by Skid Steer principle and was the first of its kind. Weighs 19 ton and is powered by GM 6/71 2 stroke diesel 160 hp. Transmission case is made from 1.5 inch thick steel and the tandem cases from 1 inch thick steel. Can be fitted with a double drum electric winch on the rear for a towed scraper. Derelict for 20 years before rescued from the scrapman.--owners Morris Family 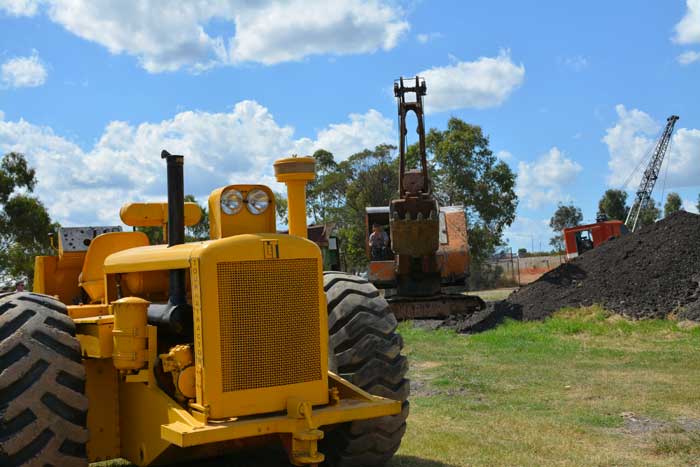 These well restored and maintained machines are not just interesting exhibits but also invaluable assets shaping and maintaining the site.