The T.S.T. Lyttelton II was a harbour tug with a length of 38 metres, beam of 9 metres, draught of 4 metres and displacement of 604 tonnes. Her twin props were powered by two triple expansion steam engines each with an indicated horsepower of 625. Her two scotch marine boilers were coal burning with forced draught.
In 2006, when all options for keeping the vessel afloat had been exhausted, the club decided to use its accumulated funds to save the entire engine room. The engine room was seen as a time capsule with virtually nothing altered since the tug was launched in 1938. Currently the engines have been restored and are on display in bay 5 of the main shed. The rest of the engine room, including the hull down to the deck plates and all piping and fittings can be found around the site. The boilers and other sundries like the propellers and anchor have also been retained.

The main engines of the tug were the two triple expansion engines built by the tug's builder Lobnitz & Co. Ltd., Renfrew, Scotland. 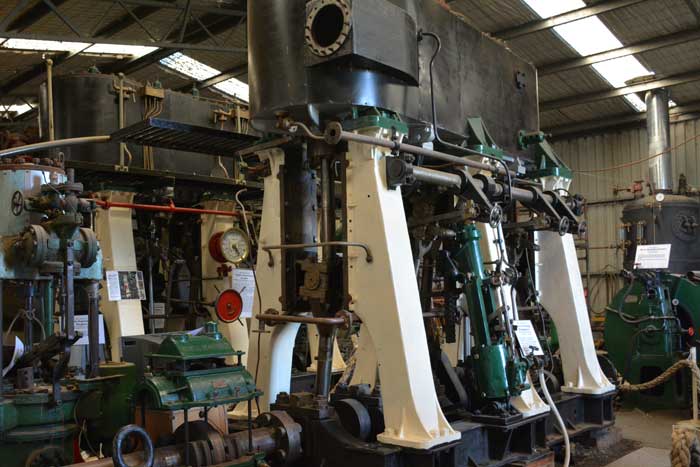 1939 Lyttelton II is launched and steams to New Zealand
1939 -1981 works as a harbour tug
1981 Sold to a Sydney steamship preservation group and steamed across the Tasman. 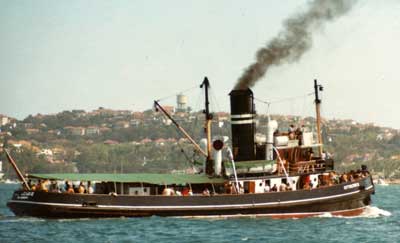 1987 Sold to a Geelong enthusist and steamed to Port Phillip bay
1989 Out of ticket up on floating dock for repairs. Funds exhausted -Seized by the dock owners and sold to Bay Steamers
2005 After being tied up for 15 years it starts taking on water
2006 Ultimatum from Vic Urban -"move it or we scrap it at your expense"
Click for detailed history

Retrieving the ship’s engine room was a very ambitious project for a volunteer run museum, but members felt that these engines were worth every effort to preserve.The tug's owners negotiated with the demolition company for the club to purchase the entire engine room for a generous price. 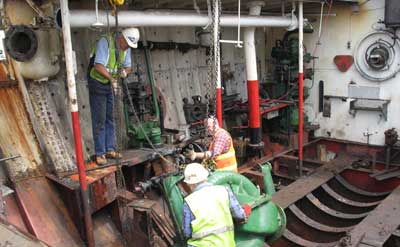 The hitch was that everything had to be removed by the time the demolition crew had cut up the rest of the ship. It all had to be done in Corio, an hour and a half from Melbourne over a 6 week period with heavy crane and transport costs.
Click for the rescue Saga.

It would not be practical to attempt to fire the tug boilers to supply steam to the engines so this Farrar boiler, which had been lying, unused at the club for decades, has been restored and brought into service. 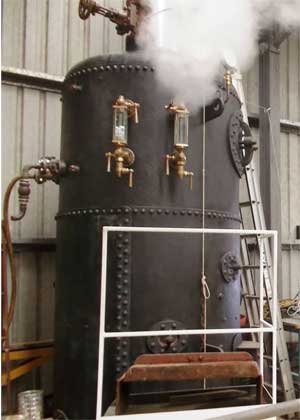 The engines have been laid out in a pattern that mimics their positions in the engine room. Props have been added to help demonstrate their functions for the public. 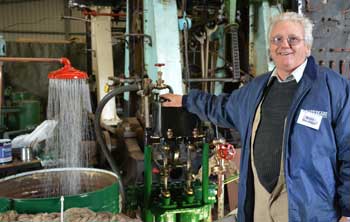 See them in action on the last Sunday of the month. 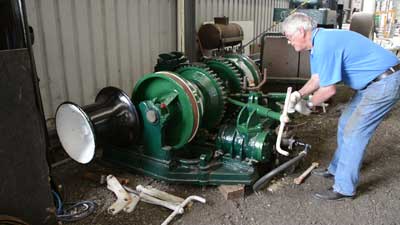 The tug thrust blocks were Michell bearings. Michell was a melbourne engineer and his developement of thin film lubricated thrust blocks revolutionised shipping. 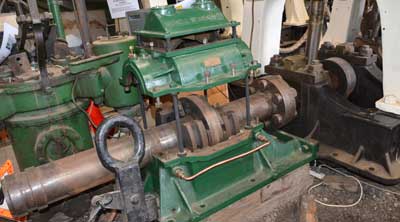 This pre WWII ship had no communication cabling. Copper voice tubes connected the bridge to the engine room.

Mechanical links via chains reflected the engine revs etc up to the bridge. 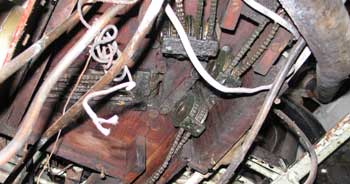