On the 6th of December 2006 Lyttelton II came up onto the slip at Rippleside, Geelong, for breaking up.

Arrangements had been made by the owners for MSTEC to buy the engine room from the scrappers for a nominated sum. The club had decided that although the engines and auxiliaries were worth saving they would be of much greater value as an exhibit if they were saved in their engine room environment and so began a mammoth exercise to retrieve the engines and engine room hull and bulkheads before the scrappers completed cutting up the rest of the ship.

Initially the club hoped the scrapping would take place in the Melbourne docks and investigated transporting the engine room intact to the club. It was an expensive option but entailed a lot less effort in dismantling and rebuilding. Once it was established that the scrapping would take place in Geelong this option was ruled out as Vicroads would not allow a load this size over the roads. There was no choice but to dismantle it.

The task was massive. There were 16 engines and pumps to be un-bolted from their frames. The thrust blocks and propeller couplings had to be undone. In order to do this the main engines had to be turned over to expose the bolts on the under sides of the couplings - no mean feat when the propellers had not turned for twenty years. The condenser, the trust blocks, a multitude of valves, steam headers, gauges, the ships telegraph system and wiring, the lighting, and the rev counters all had to be removed. There were also tanks for lubricating oils, kero etc. tool benches, sets of tools, pipe hangers, and hand railing. Then there is the pipe work - steam, exhaust and drain lines from everything.  The deck plates and walk ways had to be dismantled - the deck plates are all held in place with big screws tapped into the frames. It was all put together 70 years ago and most bolts had not been undone since. Getting the deck plates up was a major task with many of the screws having to be drilled out. In order to get the engines out, the hatch cover over the engine room had to be removed. It was held in place with hundreds of nuts and bolts that have been exposed to the ocean environment for 70 years.

By the 16th of January time was running out but most of the engines had been freed up ready to lift, nearly all the small items, gauges, tanks etc had been removed and quite a bit of the pipe work was down but there was still a long way to go and little time to do it in. 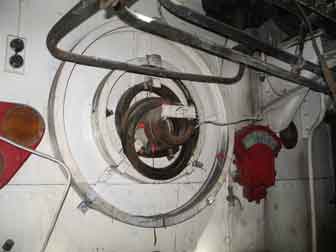 Everywhere you looked there were  things to unbolt. Spares for all the engines like these piston rings and eccentrics were bolted to the walls. 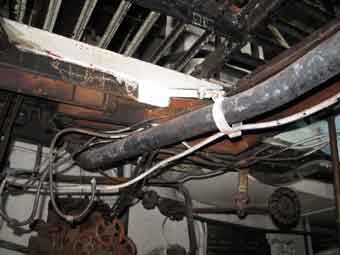 There were steam lines everywhere. 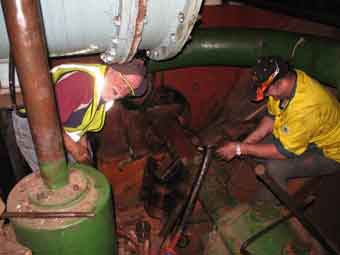 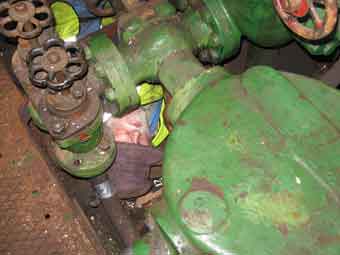 Workspace was cramped dirty and noisy and it all had to be documented so that it can go together again.

It finally felt as if we were making progress. Everything (that we knew about) was now unbolted! Today we had the first 6 hours of craning  and succeeded in removing the engine room hatch and lifting out the pipe work that had been cut or unbolted followed by the walkways and deck plates and sundry loose items that had proved too heavy or difficult to be man handled out. The big lifts were to happen the following day when the boilers and, main engines were to be removed removed. 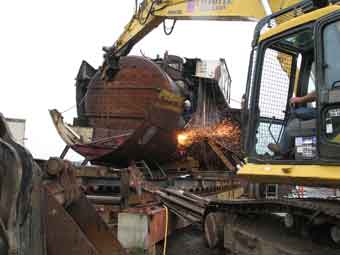 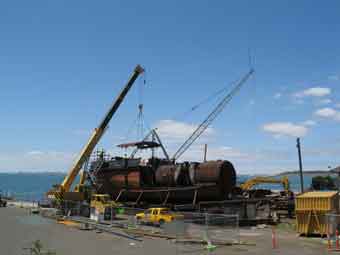 The boilers are almost cut free. The engine room hatch cover is lifted off. 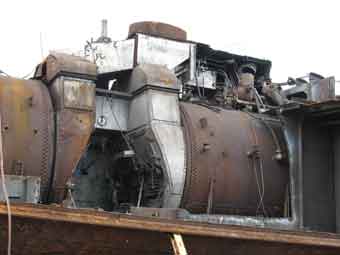 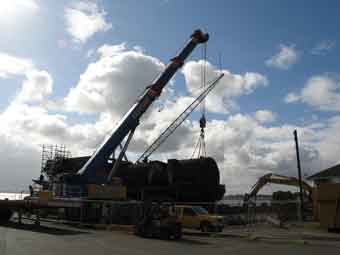 With the hull cut away the stoke hold was on display, then out comes a boiler. The removal and transport of the engines and boilers did not go as smoothly as hoped. The main problem was that there were fittings on top of one of the boilers that put it above height for the OD load. The plan was to oxy off the bolts and lift the fittings down but they proved to be very firmly attached by 70 years of rust and many hours were wasted removing them. The hope had been that we would remove the boilers and main engines and still have time to remove more items within the minimum hire period for the heavy crane but reality was very different. With a huge crane at each end of the journey and four OD transporters plus escort vehicles all beyond their minimum hire periods the contingency in the budgets was soaked up pretty quickly. It was a tense day but it was not a project you could pull the plug on half way through. 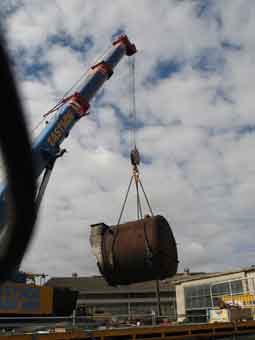 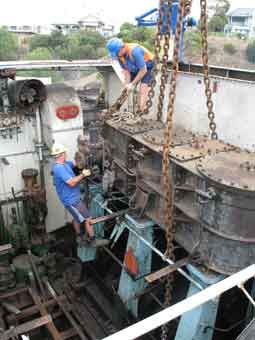 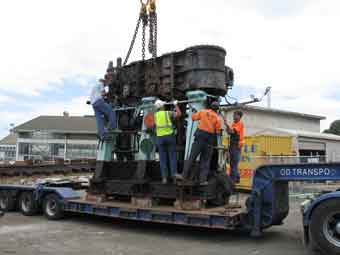 The Starboard engine loaded on the truck.

The main engines were out but there was still a lot to do and the scrappies were breathing down our necks. Luckily for the project they had a break for the Australia day weekend and a gigantic effort by a party of 7 members (about all you could fit in the engine room) loosened up the rest of it ready for lifting out the day before the scrappies returned. 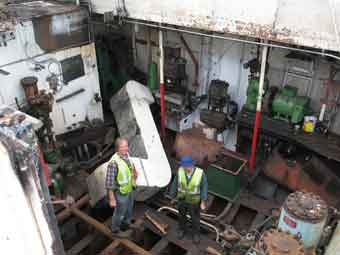 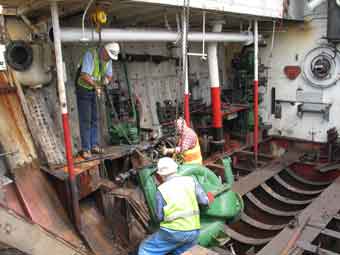 A full day's craning with a lighter crane had the engine room  cleared ready for the cutters to section the walls.

We wanted the hull sections and bulk heads in as large pieces as possible so a crane was hired to hold the sections while the cutter cut them free. 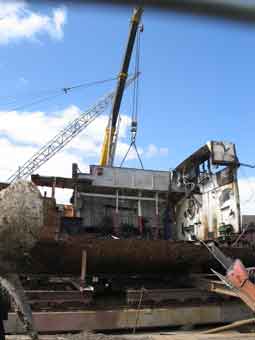 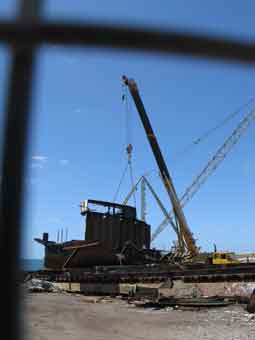 The last of our hull sections is lifted free and the job is done all bar getting it back to the club!

A big move today. Three over dimension loads brought the hull sections back to the club. A 7:30 start was made in Geelong in the hope of having the first loads on the road when the wide load permits took effect at 9:30. Once again there were hiccups, the first truck loaded was for the widest load but there had been some sort of bureaucratic bungle with the permits and the permit for that truck did not come through. It was not able to move without it. Loading of the next two low loaders went ahead but one hull section proved very difficult. It was very heavy on one side and distorted the trailer unacceptably. Eventually it was loaded with the weight more central on the deck but this left it with a 2.5 meter overhang on one side of the truck and none on the other. The two loads with permits eventually set off about 11.45 but the third load was still without a permit. At lunchtime word came through that the choices were to reduce the width to under 5 meters and go or to wait another day. A day's wait would have meant another day's crane hire at the club end straining our already compromised budget so drastic measures were called for. Off to the hire shop for a chainsaw. A wooden bollard that extended from the deck was removed and the last big load was under way. Meanwhile back at the club end, the power supply company had chosen this very day to redo the power lines across the club's entrance and there was no access for a period. On top of that the Franna crane that had been ordered was held up on another job and a slewing crane had to be substituted - far from ideal as we wanted different lumps in different spots around the grounds which meant the crane had to pack up and re-setup three times. All was overcome in the end and it was all unloaded without incurring too much in overtime charges.

Three hire truck loads and a few trailer loads brought the rest of the material back to Scoresby.