The club's collection of restored and operational diesel engines is a credit to the diesel team.

On the last Sunday of the month and over the rally weekend the engines can be seen in operation.

Click the labels below to view some of the exhibits.

It working history is not know.

it was donated by L Arthur Pty Ltd and restored by the diesel team.

It was purchased by the club in 2006 from a demolition site where it had apparently been used as a stand-by generator.

This 4 cylinder horizontal model 8HRF was built in 1952 and spent its working life coupled to a Stothert & Pitt variable output rotary piston pump. It was installed at the Commonwealth Oil refinery's installation at Port Melbourne delivering bunker oil to Station Pier and Princes Pier.

This 3 cylinder air-blast diesel no.ID219 dates from c.1928. The engine was originally installed at Carlton and United Breweries Ltd Carlton Brewery driving a standby generator. After a very expensive exercise to build the massive foundation, work is beginning on installing this engine. Full Details here

This engine was manufactured especially for instructing engineering students. It could be run on gas petrol or diesel, using spark or compression ignition. Plates were inserted to alter the compression. It currently runs on diesel.

This single cylinder horizontal Model OE115 built in 1924 is coupled to a DC generator.

Its working life started at the age newspaper then completed with the Princes Laundry who donated it in 1998.

The Deutz is the section's only German engine. Model PMV230 built in 1928.

It was installed in the State Theatre coupled to a standby generator. In 1990 it was donated to the club.

Currently out of action awaiting repairs.

Piping the exhaust gasses out of the museum has allowed for a lineup of single cylinder engines.

Early gas and petrol engines are included in the lineup. 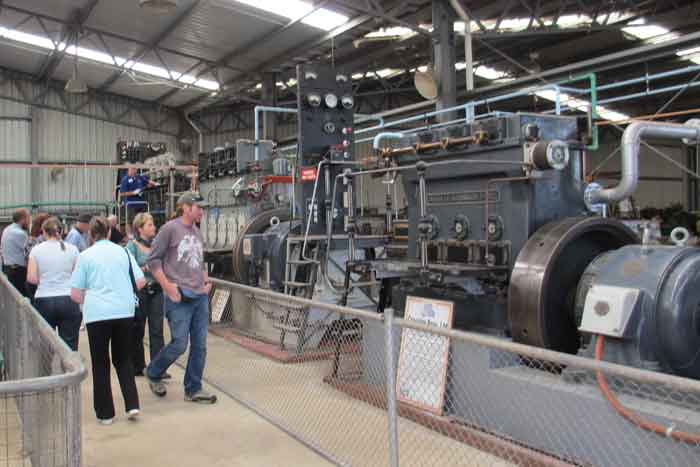