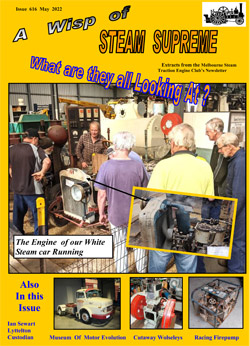 The club's White steam car is a step closer to running. It was connected up to a steam supply from the Farrar boiler and performed promisingly.
The club purchased boiler components from the UK last year and it will not be long before it can provide its own steam.
Congratulations to Warwick Bryce and the team on achieving this milestone.

WOW! What a weekend!
It was January before the decision was taken to go ahead with the 2022 rally. No one was confident that it would succeed but the membership got behind the effort and in a couple of months pulled together a great event.
The weather was favourable and the public keen to be out and about. They came in record numbers and obviously enjoyed their visit.
The new steam sawing display was a crowd pleaser. The new diesel locomotive had its first runs and performed impeccably. Members put in a great effort to have all the wheels spinning. 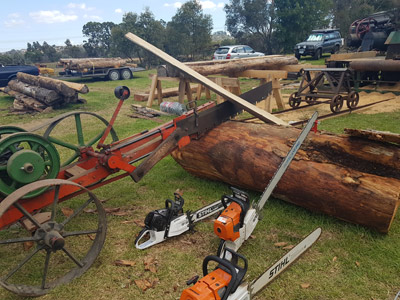